The Opposite of Addiction is not Sobriety. It is Connection

The Opposite of Addiction is not Sobriety.  This may have been the most powerful statement we heard at the ICCA conference where researchers and practitioners of many fields and backgrounds came together to learn, share information and knowledge; pushing each other to keep learning and doing more in our pursuit to do what works best.  Community Corrections has never been short of challenges and barriers.  It is encouraging to see dedicated professionals working hard to break through.

The conference encompassed workshops surrounding some of these challenges, including the opioid crisis, relapse prevention, housing and employment, and our jails being filled with a large amount of people with significant mental illness and trauma.  While there were many outstanding workshops at the Seattle conference, in this blog we will talk about discussions and community corrections solutions with relationship to the opioid crisis.

Who are some of the people who have been impacted directly by this crisis?

Three physicians, Ingrid Binswanger, Joshua D. Lee and Lara Strick, presented “Realizing the Potential of Integrating Opioid Use Disorder Treatment into Correctional Systems” in the openging plenary session.  They all described success in treating opioid addiction using medication treatment, such as Nalaxone (an opioid antidotet), Buprenorphine, Suboxone (buprenorphine and naloxone) Naltrexone (Vivitrol) and methadone, and pros/cons to each.  Dr. Lara Strick described a situation in which a chronic heroin user was released and returned to prison so quickly, because of continued relapse, that he was never able to even make the appointment to start medication treatment.  We were particularly struck by the fact that his road to recovery started by smuggling his own Suboxone into prison, not to get high but to get better. He's now been clean for three years and is employed.

We felt this powerfully illustrates both the need for our system to be responsive to what works, to allow for individualization of treatment and to evaluate the impact of not providing the treatment pre-release because of administrative prohibitions.   Let me say this again, the research strongly pointed towards the importance of beginning opioid treatment pre-release.  What may seem uncomfortable and unheard of (starting opioid medication treatment before releasing) could lead to lower recidivism rates, reduction in death rates upon release and close a revolving door for many.

Brad Finegood, an Assistant Division Director in the Behavioral Health and Recovery Division in King County spoke during the afternoon plenary session.  He shared his personal experience with his brother, who he described as “a good kid, a really good kid”.  His brother overdosed on heroin and left his family grieving and wondering how it happened and how they didn’t realize he had this addiction.  Brad wonders if their wasn’t such a stigma to opioid/drug addiction and the associated treatment, maybe he would have reached out and not hid it….maybe his brother would still be alive.

In a session about the Opioid crisis in Canada, Heather Kerr described how one problem led to another and instead of fixing the problem, a crisis emerged.  Specifically how some doctors had been over prescribing opioid medication and when scrutiny began, started to taper off their patients very quickly or immediately.   People who had relied on medication for years were now suddenly being taken off and in many cases, without much of a transitional plan.  The addiction was so great that many of these patients turned to heroin and/or continued finding illegal ways to obtain opioids.

The addiction is such a battle to win and medication treatment can work but can be difficult for many addicts.  When the urge is there, it can be more difficult to get to a clinic for treatment than scoring something illegally, especially if the addict is not particularly motivated.

Thea Oliphant-Wells sat on the afternoon panel as well and described her addiction and recovery.  She offered inspiration and hope to this crisis when describing her journey to not just overcome this addiction but gain a higher education in social work and help women offenders with re-entry planning, access to resources and connection with mentors.  She joked that she is one of the few that will put herself out there and admit to the addiction because of the stigma associated with it.

Many people touched by this addiction experience an empathy that drives them to research, educate, share and search for solutions.  As with almost any issue, it doesn’t become real for most of us until we are impacted in some way or are able to experience empathy second hand.  I admit that when I started in this field, uneducated on the subject, I made quick judgement on methadone treatment.  I thought it sounded like we would be enabling their habit and we never approved our community based clients that option (that was longer ago than I’d like to admit so times have changed).  I didn’t understand some of the benefits and rational around using medication based treatments as a way to help people with serious addictions stay clean and be able to make changes in their lives.

In the plenary session, Brad Finegood also admitted he had a bias at one time.  Not about using methadone as a way to get clean, he was on board with that.  He did assume that his clients needed to eventually discontinue use.  He asked his client when he was going to be ready to discontinue and his client said “never”.  The client explained that he had tried three times to discontinue and went back to using and committing crime, almost losing his family.  When he was taking medication he was productive, was active with his family and in his career.  This spoke to me too, if there is something out there that could help that much, then why not.  This forum personally helped me understand more about the treatments available, benefits and what changes still need to be looked at.  The examples of client stories helped me build empathy around needing effective treatment options.

So what is more compelling than the connection opioid addicts have with their drug of choice?   In community based corrections we have an opportunity to intervene and begin a healing connection, but from what I heard, it takes opioid medication treatment for these opioid addicts to start this connection.  The treatment takes time and will be more effective if started before they are out on their own to get it right.  So why wouldn’t we give this every chance we can?

Addiction is just one example in the community corrections field of how connection is a big part of the solution.  Connecting with family and friends, the community, treatment providers, employers, housing and being a part of something bigger than what is actually holding them back.

The opposite of addiction is connection.  Community connection and researched based treatment can change lives.

To request more information or schedule an online demonstration of our community corrections software, click here. We offer integrated corrections software and support services for probation/parole, residential and reentry programs. Our Program Foundation Platform and twenty robust modules were designed by community corrections practitioners to guide organizations toward a powerful EBP implementation, relieve them of strenuous paperwork and manual processes, and enable them to focus on what matters - people! 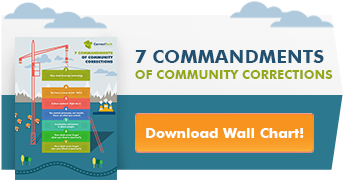